From the mid-1960s onwards, the Vulcan’s white paint-scheme was replaced by green and grey camouflage, the change in colour being a very visible sign of a change in tactics from high-level to low-level attack. Advancing Soviet SAM technology meant the V-Force could no longer rely on speed and height for protection. 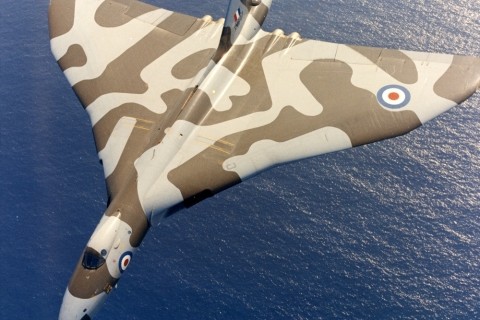 The switch to low-level operations seriously reduced the effectiveness of Blue Steel, which could now only be launched from a range of 25 miles. Consequently, the task of destroying primary targets was passed to the Yellow Sun squadrons, the ­Blue Steel units being restricted to peripheral targets.

Responsibility for the British nuclear deterrent was handed over by the RAF to the Royal Navy, and its Polaris submarines, on 30 June 1969. QRA ceased on midnight that day and brought to an end the longest period of constant alert ever maintained by a British military force.

Following the hand-over, the Vulcan force was re-tasked to the low-level conventional bombing role, although it retained a tactical nuclear capability using the WE177B parachute-retarded bomb.