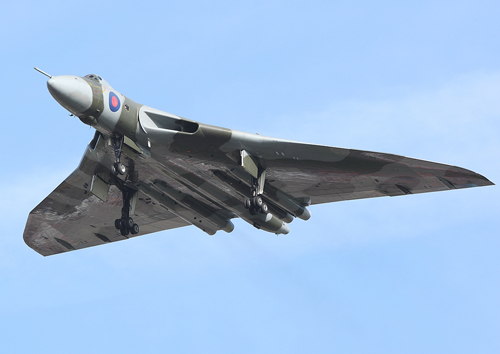 A wonderful and interesting afternoon was spent listening to our guest speaker Kevin ‘Taff’ Stone, Chief Engineer with the Vulcan to the Sky Trust (VTTS). ‘Taff’ joined VTTS at the start of XH558’s restoration to flight and was with the team when XH558 made her first post-restoration flight in October 2007 through to her retirement from flying at the end of 2015.

He told us about the restoration to flight programme work and the engineering work needed to keep XH558 in the air during her eight seasons of display flying, with further insight into his RAF Career which included Vulcans and 558, but also other aircraft which included the Red Arrows.

No tags were found.

It was the first time XL426 had streamed a 'chute since 2008 and it was a surprise bonus for the hundreds of enthusiasts at the event.

Our 2019 Legends of the Air Prize Draw was made at our Christmas Event and Buffet on 30 November, with the winning tickets drawn by our guest speaker on the day, Squadron Leader Joe Marsden.

First prize was a seat on board Vulcan XL426 on a taxi-run at London Southend Airport.

The Mayor of Southend-on-Sea, Derek Jarvis, and Mayoress, Valerie Jarvis, together with other Southend Council dignitaries visited XL426 on 2 April.

They spent time viewing the iconic bomber and toured the Trust's workshops, where a replacement engine is in the final stages of being readied to be installed in the Vulcan.