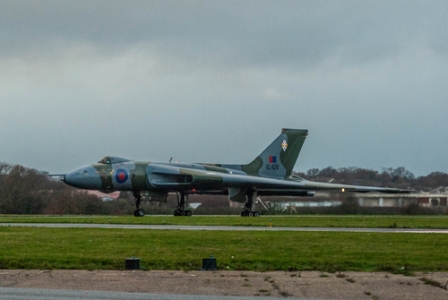 XL426 carried out two successful taxi-runs at London Southend Airport on the afternoon of 8 December 2018.

The runs were part of an engineering exercise and the event was not open to the public, although some lucky enthusiasts in the airport car parks got a good view of XL426 as she taxied towards Southend's runway follwoing start-up on the airport's main apron.

It has been a constant source of amusement for anyone involved with the Engineering Team over the years that the operating manual for the Vulcan tow bar states that it can be attached to the aircraft by two people.

We have never done it with less than four, most usually with five or six!

It's not that it's difficult but it is heavy to move and attaching it to XL426 needs several pairs of hands to carry out a number of functions, some of them simultaneously.

Our mobile work top is a simple piece of kit but we couldnt do without it.

Over the years we replaced its wood top which had either rotted away or become broken so we put a good steel sheet in place and sprayed it with NATO green paint to match the rest of our ground equipment.

We are delighted to be able to show you a unique, behind the scenes, video of an engine run and systems test. 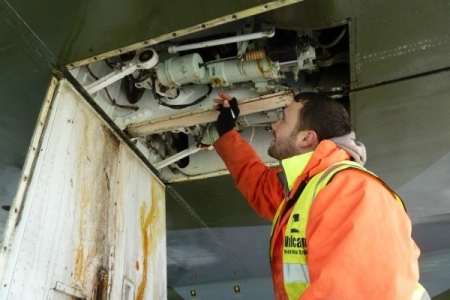 During 2015, Jamie Keene (Engineer) carried out a survey of all eight of Vulcan XL426's Powered Flying Control Units (PFCUs) to check critical adjustments.

Paul Hartrup (Trustee and Lead Engineer) has spent time stripping down the PFCUs and renovating them where necessary over the past years, frequently replacing leaky oil seals.

With the top of XL426's fin being some 27 feet above ground, getting access to the Vulcan's fin and rudder has always been a challenge.

Up until now we have used our set of giraffe steps but things can now change following our acquiring this year of a cherry picker.

The cherry picker is now in service making it easier for our engineering team to get to those 'hard to reach' places.