In common with all other Vulcans, she was constructed by A V Roe & Co. at its Chadderton, and Woodford plants, and made her first flight, lasting 95 minutes, from Woodford on August 23rd, 1962. After four further test flights, XL426 was collected by an RAF crew and entered service with 83 Squadron at RAF Scampton on September 13th, 1962.

The Scampton Wing (Nos. 27, 83 and 617 Squadrons) were at the time in the process of equipping with the Blue Steel stand-off missile. From September 1961, all aircraft delivered to these squadrons were specially modified to carry the new weapon, which was loaded, semi-recessed, in the Vulcan’s bomb-bay.

In December 1962, Wing Commander (later Group Captain) John Slessor took over command of 83 Squadron from Wing Commander (later Air Commodore) Ray Davenport. John Slessor selected XL426 as his personal aircraft for his three-year tour, and she proudly bore the squadron commander’s pennant painted below her cockpit. On September 10th, 1963, whilst returning from Goose Bay, Canada, John Slessor flew XL426 to RAF Scampton in 4 hours 5 minutes - an unofficial record, pre-Concorde, for a crossing of the North Atlantic at that time.

In April 1964, the centralised servicing was introduced at RAF Scampton, meaning aircraft were no longer assigned to individual units, but instead were ‘pooled’ and assigned to squadrons on a day-by-day basis. XL426 was flown by all three squadrons of the Scampton Wing, which was now was fully operational with Blue Steel.

With the transfer of the nuclear deterrent role to the Royal Navy in 1969, Blue Steel was withdrawn and the Scampton squadrons were assigned to the tactical nuclear and conventional bombing roles.

Individual unit allocations were resumed in January 1971, and for the next 10 years, XL426 spent most of her time with 617 Squadron, although she also had brief spells with 27 Squadron and 230 Operational Conversion Unit, which had moved to RAF Scampton from RAF Finningley in December 1969.

In 1981, XL426 had the dubious distinction of being the 298th and last Vulcan to undergo a major service at RAF St Athan. Completion of the service was marked with a formal hand-over ceremony at which Air-Vice Marshal Richardson, RAF Support Command, and RAF Waddington’s Commanding Officer, Group Captain Warrington, both signed for the aircraft. Also present was Warrant Officer John ‘Bob’ Shillings, one of XL426’s first crew chiefs when she had entered service with 83 Squadron back in 1962.

617 Squadron disbanded at the end of 1981 and XL426 was transferred to 50 Squadron at RAF Waddington, making the short flight south to join her new unit on January 4th, 1982. 50 Squadron became the last Vulcan squadron, operating six aircraft as air-to-air tankers until the Vulcan was finally withdrawn from operational service in 1984. XL426 was not converted to a tanker, but was one of three Vulcans retained by the squadron as a B2 to act as a crew trainer, helping to take some of the weight of flying off the shoulders of the already overstretched tankers. She had also been used as a trials aircraft as part of the Vulcan tanker test programme in 1982. XL426 was one of four Vulcans that took part in the Falklands Victory Flypast over London on October 12th, 1982 (although XL426 herself had not played an active role in the war itself). On March 30th, 1984, XL426 had the ultimate accolade of performing 50 Squadron’s last display, in the hands of Squadron Leader Joe L’Estrange, at the squadron’s disbandment ceremony at RAF Waddington.

Withdrawal of the Vulcan from operational service did not, however, spell the end of XL426’s flying days. Very much aware of the Vulcan’s tremendous public relations appeal, and already committed to a number of air displays appearances in the upcoming 1984 season, XL426 was kept airworthy (along with XH560 in reserve) for air display purposes. The two aircraft formed what became known as the Vulcan Historical Flight (later the Vulcan Display Flight - VDF), staffed initially entirely by volunteers. Under the command of Squadron Leader (later Group Captain) Bill Burnett, the Flight and XL426 gave their first display at No IX Squadron’s Standard Presentation Parade at RAF Honington on May 23rd, 1984.

The Flight went on to give more than 50 displays during the course of the 1984 season, and it was agreed to continue displaying XL426 into 1985. As the 1985 season progressed, a close eye was kept on XL426’s flying hours, as the time when she would require another major service was rapidly approaching. Plans were put in hand to replace her with another aircraft and, eventually, a replacement aircraft -XH558 - was found (retrieved from the fire dump at RAF Marham) and XL426 gave her final display at the RAF Coningsby Open Day on June 14th, 1986.

XL426 was put up for sale during the summer of 1986 and agreement was reached with a French consortium for her purchase. Meanwhile, the VDF was temporarily relocated to RAF Scampton to allow runway resurfacing to take place at Waddington, XL426 making the short flight back to her former home on July 27th. The French deal subsequently fell through and XL426 was sold to Roy Jacobsen, who had purchased another Vulcan (XM655) two years earlier. XL426 was delivered to her new owner at Southend Airport on December 19th, 1986, following a 20 minute flight from RAF Scampton. On arrival at Southend, XL426 had amassed 6236 hours flying time, having made over 1800 separate flights.

Roy Jacobsen had ambitious plans to operate XL426 as a civilian display aircraft, under the auspices of an organisation he had formed called the Vulcan Memorial Flight. XL426 was entered onto the British civil aircraft register as G-VJET and approaches were made to a number of potential sponsors. However, the sums required to carry out the necessary servicing work and finance the aircraft’s ongoing operation could not be found and XL426 remained dormant at Southend. In 1990, local enthusiasts formed the Vulcan Memorial Flight Supporters Club (VMFSC) to help promote Mr Jacobsen’s continuing efforts to return XL426 to the air, and to also take care of the aircraft’s continued preservation.

The VMFSC took over ownership of XL426 in July 1993 and subsequently re-formed as a registered charity, the Vulcan Restoration Trust. 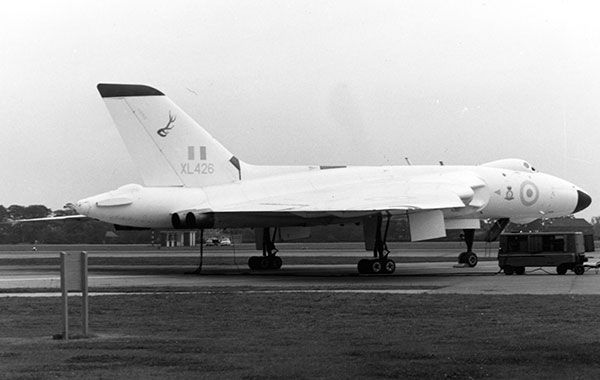 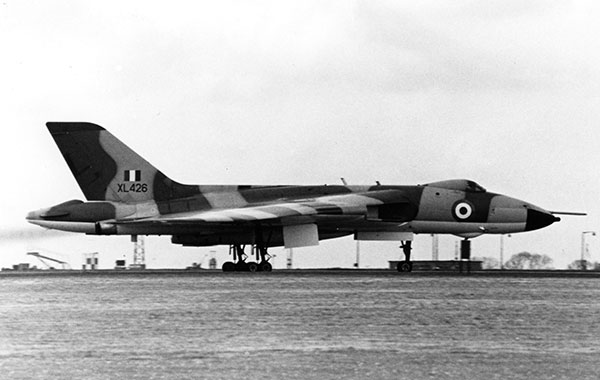